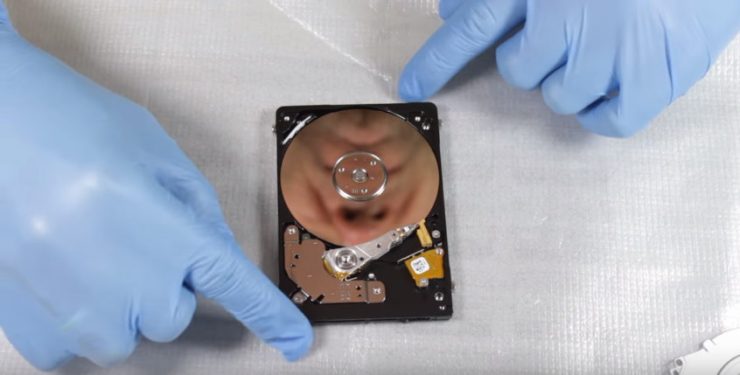 How to open and fix portable disk on an example Maxtor M3.

It’s not professional way of fixing disks. The way how to repair disk allow to access to data. After bringing disk to live all data must be copied immediately from old disk to new one. Fixing is only for copying data, not for further disk usage.

My disk fell on the floor and then did not want to run. When I tried to start the disk, I only heard the beeping noise. Probably the motor is trying to start the platters and it can’t because the head stuck on a platter. So we have to move head to the park position.

To open the disk I used Torx T6 and five-pointed star 1.2 screwdrivers.

Opening the enclosure is not so easy. The case is tightly assembled. It was hard for me. It took much longer than I showed on the video. I used a thin flat screwdriver. I tried to stick between the tiles many times. As a result, the enclosure is very scratched.

Alternative way: Get a sharp pin (or something with a sharp end), then with a knife put it in the small space that the pin has made and rotate the knife slightly so you can break a bit of the enclosure, then get a big screw driver and get in the space and open it.

Disk inside is normal mobile Seagate ST2000LM007 (7mm width) hard disk. It can be used as HDD in PC or laptop or PS4.

The screws are located under the silver plate – this is an anti-static sticker, and the lack of it can cause problems with electricity

Disk is connected with USB cable by “sata to usb 3.0 adapter”. This adapter You can buy with whole enclosure. It’s cheap, around 5$.

We can see that the head is stuck on a platter. We have to move it to the park position.

Best way to do this is to turn the platter and pull on the head into the park position.

Other problems with disks wich can appear:

Disk keep spinning and connects to the Windows, but is never read and files are inaccessible and after a while it disconnects.

This website uses cookies to improve your experience while you navigate through the website. Out of these cookies, the cookies that are categorized as necessary are stored on your browser as they are essential for the working of basic functionalities of the website. We also use third-party cookies that help us analyze and understand how you use this website. These cookies will be stored in your browser only with your consent. You also have the option to opt-out of these cookies. But opting out of some of these cookies may have an effect on your browsing experience.
Necessary Always Enabled
Necessary cookies are absolutely essential for the website to function properly. This category only includes cookies that ensures basic functionalities and security features of the website. These cookies do not store any personal information.
Non-necessary
Any cookies that may not be particularly necessary for the website to function and is used specifically to collect user personal data via analytics, ads, other embedded contents are termed as non-necessary cookies. It is mandatory to procure user consent prior to running these cookies on your website.
SAVE & ACCEPT