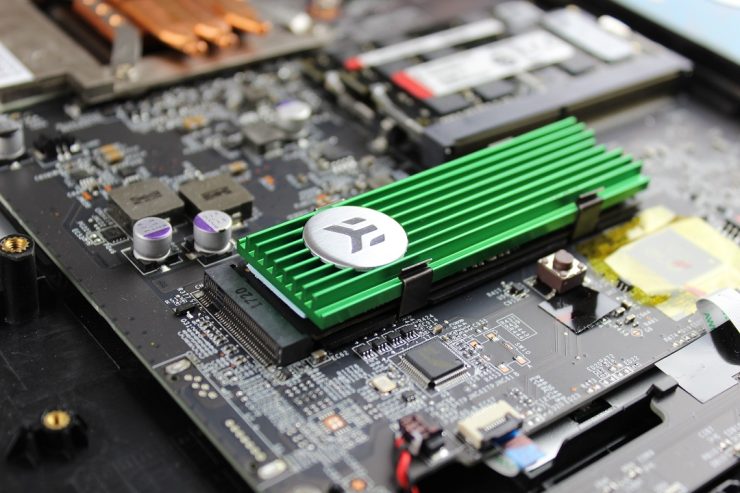 M.2 SSDs are much smaller than SATA SSDs. The construction resembles RAM memory modules. They are installed flat in the motherboard sockets. Due to the compactness of the controller, disks m.2 reach higher temperatures already without load. It is worth keeping the temperature of the disk within the limits recommended by the manufacturers, which are usually between 0 and 70 degrees Celsius. In this article, I will check if the passive cooling of the M.2 disk in the laptop makes sense. The test disk has a capacity of 1TB and read/write up to 3500 MB/s. The temperature of the disk without cooling and without load is about 60C. The disk heats up to 105C under load.

After opening the laptop, we have access to the m.2 disk. I do not remove the original stickers, because I will lose the manufacturer’s warranty. I cut the thermal strips to the length of the disk. I stick the thinner strip to the bottom of the disk, and the thicker one to the top, where the main electronic elements are located. Then I fasten the two cooling elements with clips and the disk is ready for assembly.

The disk is mounted, the laptop is skimmed, tests can be performed. The temperature without load is around 58C. At full load, the disk temperature only reached 80C, which is 25C less than without passive cooling.

When choosing a set for cooling the M.2 disk in a laptop, you need to take into account its dimensions so that after installation the entire disk does not protrude above the line of the case.

A set for passive M.2 disk cooling in a laptop is a very useful thing. Without load, the temperature difference is almost imperceptible, our disk will appreciate the heat sink when working under stress.

This website uses cookies to improve your experience while you navigate through the website. Out of these cookies, the cookies that are categorized as necessary are stored on your browser as they are essential for the working of basic functionalities of the website. We also use third-party cookies that help us analyze and understand how you use this website. These cookies will be stored in your browser only with your consent. You also have the option to opt-out of these cookies. But opting out of some of these cookies may have an effect on your browsing experience.
Necessary Always Enabled
Necessary cookies are absolutely essential for the website to function properly. This category only includes cookies that ensures basic functionalities and security features of the website. These cookies do not store any personal information.
Non-necessary
Any cookies that may not be particularly necessary for the website to function and is used specifically to collect user personal data via analytics, ads, other embedded contents are termed as non-necessary cookies. It is mandatory to procure user consent prior to running these cookies on your website.
SAVE & ACCEPT